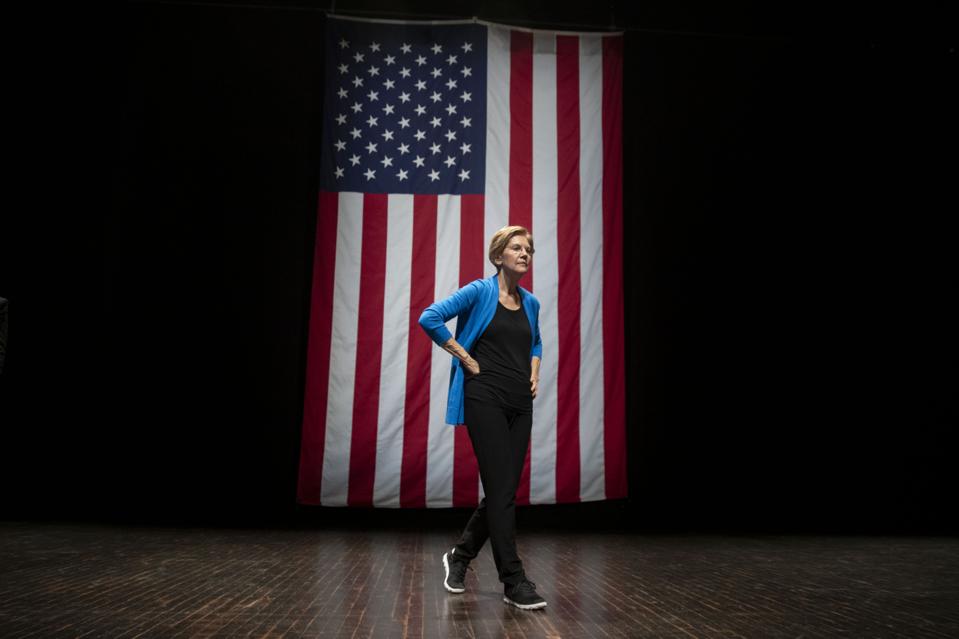 A wealth tax is an idea that is not going to go away. It is an example of one of those proposals that was out on the fringe being promoted by a third party that has been, if not embraced is at least holding hands with the Democratic Party. I dug into the wealth tax a bit in 2012 when I interviewed Green Party candidate Jill Stein on the party’s platform.

Phil Magness of the American Institute For Economic Research, on the other hand, does not think that the wealth tax is such a hot idea. Just for context I asked him whether AIER leans right or left. He started going on about the free market and what not, which I took as leans right. The “Who We Are” section of the website includes:

“AIER envisions a world in which societies are organized according to the principles of pure freedom—in which the role of government is sharply confined to the provision of public goods and individuals can flourish within a truly free market and a free society.”

In order to give equal time to the Green Party here is something from the 2020 platform by way of contrast.

“Our current economic system is gravely flawed. It is unjust and unsustainable because it is premised on endless economic growth and destruction of nature. Our market economy, by externalizing the environmental and social costs of greenhouse gas emissions, is creating the greatest market failure in history: climate change, and its devastating effects. Our government’s top economic goal — increasing Gross Domestic Product — impels us to perpetually intensify our resource use and environmental destruction.”

For what it is worth “Enact a wealth tax of 0.5% per year on an individual’s assets over $5 million.” is still in the Green Party Platform. Yowzers. There are Democrats in the Senate who would have to pay some of that. Elizabeth Warren’s proposal had higher rates but did not kick in till $50 million when it would be 2% and then 3% over a billion. And GP does not seem to be indexing. If $5 million was the right number in 2012, it should be $5.7 million in 2020.

Mr. Magness starts off by disputing the estimates of economists Emmauel Saez and Gabriel Zucman. They estimate that in 2019 a wealth tax of 2% on fortunes over $50 million with a 1% surtax for those over a billion would have yielded $187 billion. Mr. Magness claims that:

This wildly optimistic projection is also almost certainly without basis in economic reality.

Mr. Magness argues that Saez-Zucman are overstating the concentration of wealth at the top. And of course this also calls into question the notion that wealth inequality is skyrocketing. Oddly, to me anyway, the wealth concentration numbers that are being bruited about are derived from IRS income statistics with concern about the effect on behavior of the Tax Reform Act of 1986. Since a very large amount of wealth exists in the form of unrealized appreciation, it is hard to see how far income numbers can take you.

Then he gets into a debate on how useful the Forbes 400 list is in this debate. There is one comment I find really amusing. It mentions an IRS study in which IRS economists compared Forbes 400 numbers to estate tax returns. Mr. Magness then has an observation that I find hilarious:

The Forbes 400 list, it would appear, systematically over-values the fortunes of the ultra-rich on average…”

There is an entire industry of well paid white collar professionals endeavoring to have the number reported on Form 706 (the estate tax return) be as low as possible. The Forbes team doing the 400 list are a team of journalists and have the following principle:

We purposely excluded dispersed family fortunes, but we did include wealth belonging to a member’s immediate family if the wealth could be traced to a living founder of the fortune.

So if somebody who is still alive has used techniques like family limited partnerships and grantor retained annuity trusts to shift assets out of their taxable estate, the Forbes 400 crew is still counting them.

It Will Give People Work

What is going on systematically is estate tax professionals driving down the value of what is reported on Form 706. Of course they will start doing the same thing with the wealth tax. The devilish details of a wealth tax are mind boggling. What do you do about spray trusts, for example? A draconian approach might be to apply the wealth tax to anything that is owned by a trust that cannot be absolutely traced to a particular individual.

There is are a lot of problems with a wealth tax, but there is one really good thing, if you are, like me, the child of parents who grew up in the Great Depression. It will give people work.

Mr. Magness talked about other countries that have tried the wealth tax and had it not work so well, but I did not dive that far down that rabbit hole. There is however a large problem with the amount that would have to be invested in establishing the systems to assess and collect a wealth tax. That does not bother me so much, since it would be a sort of white collar jobs program.

What is disturbing is the notion that all the work would go into establishing and collecting the wealth tax only to have to refund it all, with interest. This is a real threat. Dollars to donuts most wealth tax returns with multi-million dollar checks will be followed as night follows day with protective refund claims. The tax will be contested in multiple circuits and the Supreme, little as they like tax cases, will have to deal with it.

Just as you will not get the economists to agree on how bad wealth inequality really is, you can’t get legal scholars to agree on whether a wealth tax is constitutional.

You will find some like Dawn Johnson and Walther Dellinger who are passionate with the view that it would be constitutional as they express in this Washington Post article:

The supposed constitutional problem involves a notoriously flawed 1895 decision: Pollock v. Farmers Loan and Trust Company. In that case, a sharply divided court reversed a century of precedent and practice to invalidate the nation’s first peacetime income tax, with sweeping language that effectively denied Congress the authority to tax income or wealth.

Here is the big quote from Pollock:

That the law in question, in imposing a tax on the income or rents of real estate, imposes a tax upon the real estate itself, and in imposing a tax on the interest or other income of bonds or other personal property held for the purposes of income or ordinarily yielding income, imposes a tax upon the personal estate itself; that such tax is a direct tax, and void because imposed without regard to the rule of apportionment, and that, by reason thereof, the whole law is invalidated.

Their argument is that Pollock was just wrong:

Pollock was so weakly reasoned and wrong that the nation rejected it before the others were overturned, by quickly ratifying the 16th Amendment to authorize a national income tax. This extraordinary reaction obviated the need for the court to rectify Pollock, even as it abandoned numerous other decisions that similarly had been driven by its hostility to any legislation that had the effect of economic redistribution.

It is still there though. And the Federalist Society seems to like Pollock as you can see from this piece by J. Kennely Davis. Five of the current member of the Supreme Court have some sort of Federalist Society connection (although that of Chief Justice Roberts might be a little tenuous). And with the passing of Justice Ginsburg, it may be six before long.

There are other tools for attacking inequality. Given the constitutional odds, enacting a wealth tax would be silly.