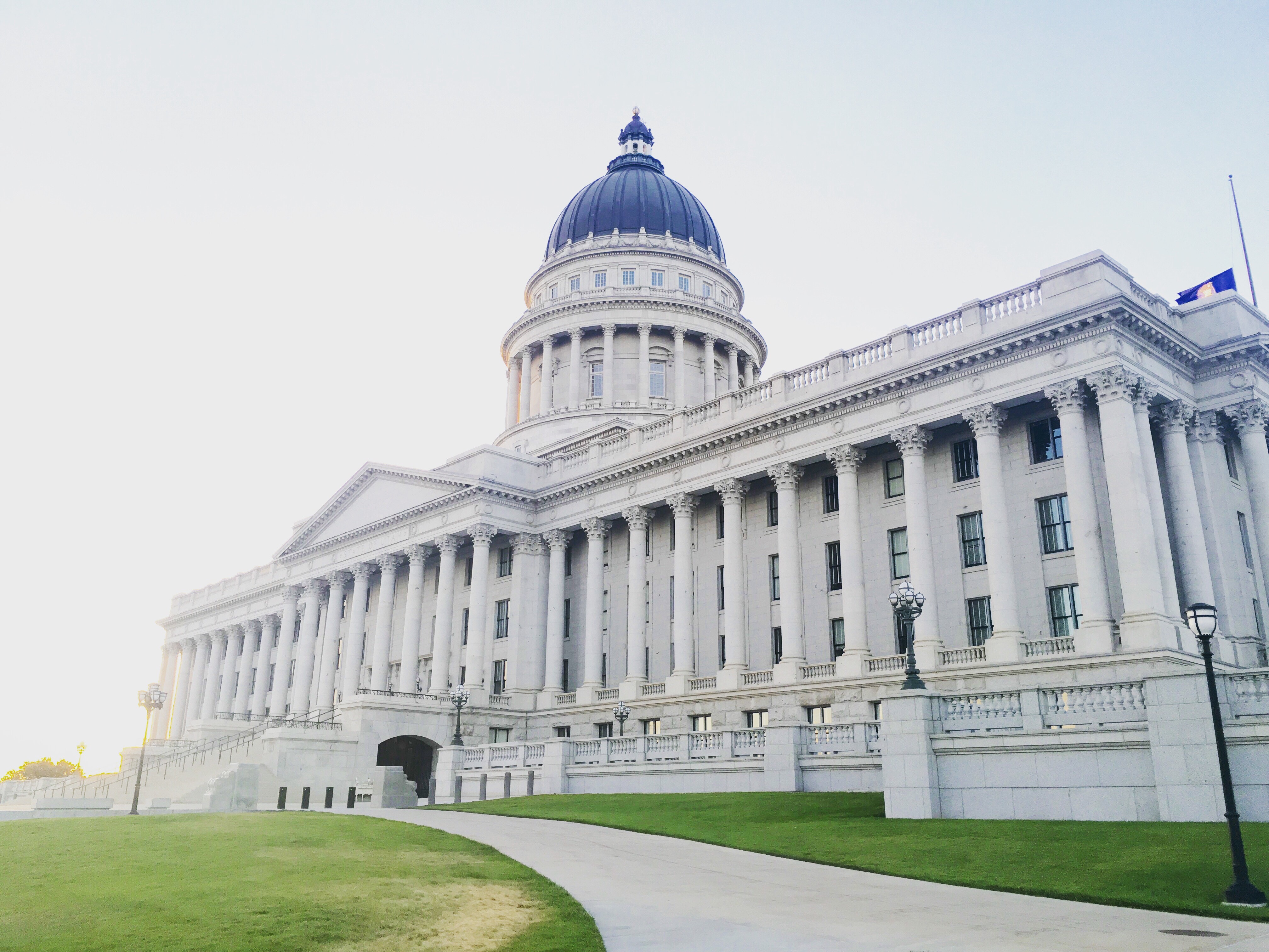 Utah lawmakers are reportedly targeting a December 12th special session as a tax reform task force makes the final adjustments to a plan which broadens the sales tax base, reduces income tax rates, and adjusts revenue earmarking. The proposal is intended to help rebalance a tax code that has swung too far toward reliance on income taxes as the growth trajectories of income and sales taxes have diverged over the past decade, and to reverse some of the erosion of the sales tax base attributable to a changing economy.

The draft legislation, which has undergone several revisions, scales back some of the sales tax base broadening proposed by legislators earlier in the process, but would still include a broader range of transactions in the tax, eliminating exemptions for:

The revenue from base broadening, along with an increase in the car rental tax (from 2.5 to 4 percent), would support:

Funding for several programs would be shifted within the budget, with sales tax earmarks for transportation reduced (replaced by the higher diesel tax) and higher education funding shifted from the income to sales tax.

All told, the sales tax base broadening provisions are expected to raise $501 million, while the income tax provisions—including the earned income tax credit and grocery credit—will cost $581 million, for a net tax cut of about $80 million, paid for out of recent surpluses. Earlier versions expanded to additional services, while the most recent draft adds one new exemption, for feminine hygiene products.

As we’ve written in the past, Utah’s tax code is the envy of is peers, with tax reforms adopted in 2007 giving the state one of the best-structured income taxes in the country. Utah’s economy, moreover, is booming. Unfortunately, some of the gains made in 2007 are being undone by the increasing divergence between sales and income tax revenues, resulting in a code that leans more heavily on income taxes than it should. The trend is one of long standing—over the past four decades, the sales tax has declined 31 percent as a share of state tax collections while the income tax is up 60 percent—but has been accelerating, driven by the shift in consumption patterns as we become a more service-oriented economy. 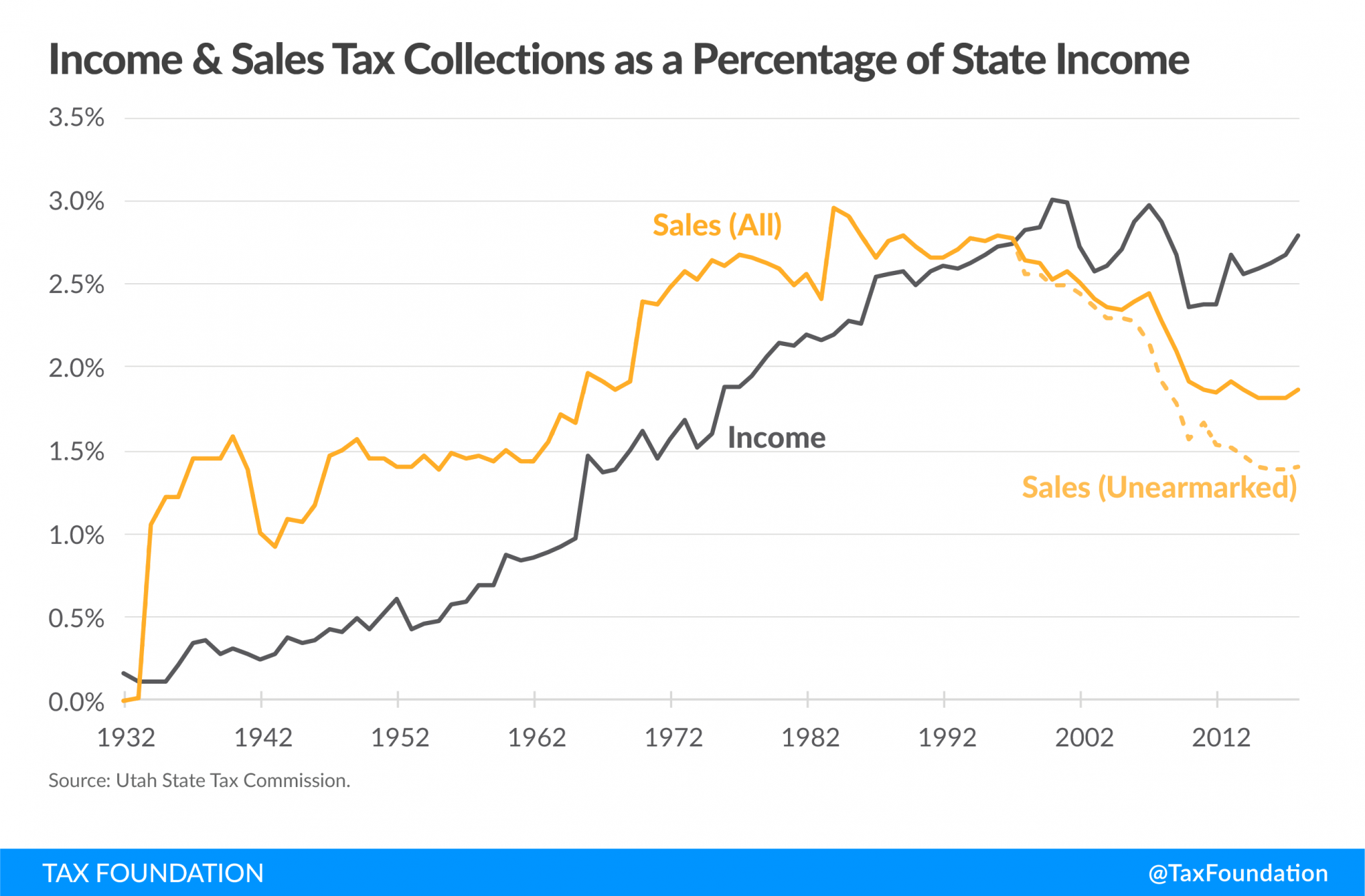 Reform today, therefore, would modernize the sales tax, giving it a tax base that reflects today’s economy and is flexible enough to capture tomorrow’s. It would use that revenue to reduce income tax rates, since income taxes have a greater adverse economic impact, as well as to rebalance revenue reliance. And it would maintain desired progressivity through targeted, efficient means.

The proposed tax restructuring revisions are not perfect, but they represent an important step in the right direction. Instead of relying on a reduced rate on groceries, which studies suggest does little to improve the progressivity of the sales tax, this plan would extend the sales tax to cover more high-end transactions while using revenues for more targeted relief: an earned income tax credit, a grocery tax credit for lower- and middle-income families, and a Social Security Income tax credit. These policies are not perfect—indeed, there are good arguments to be made against preferential treatment of Social Security income—but they are much better targeted than the current reduced rate on groceries.

As we observed previously, policymakers often exempt or lower rates on certain classes of consumption as an attempt at progressive reform, but it doesn’t always work out that way. Prepared foods are taxed at the standard rate and most of the progressivity of taxing unprepared foods is addressed by the exemption for SNAP (food stamps) and WIC purchases, while the exemption is enjoyed by high-income earners as well—who often spend considerably more on groceries.

In fact, while not enough work has been undertaken to establish a consensus, there is research finding that lower-income taxpayers would actually be better off if groceries were fully included in sales tax bases (while retaining the federally-indicated exemption of SNAP and WIC purchases) and revenue-neutral adjustments made to the tax rate. The lower grocery rate is designed to create progressivity but largely fails to do so. Base broadening to spread the tax burden to a wider range of consumption, combined with targeted relief, is a superior option.

Tax reform, like most major undertakings, is messy. There will always be complaints about what’s in, what’s out, and how and by whom those decisions are reached. But Utah has a real chance to build on a reform effort that began in 2007, when lawmakers overhauled corporate and individual income taxes but fell short of initial plans to bring the sales tax code into the 21st century.

Ideally, legislators should push for a more robust package of sales tax base broadening. That tax reform is hard is not a reason to pull back, but rather a reason to get it right the first time rather than having to return to the issue again down the road. The base expansions in the draft legislation are meaningful and necessary, and help rebalance the tax code, but they fall far short of the structural adjustments that would allow the sales tax base to grow with the economy in the future.

By moving forward with reforms—preferably bolder and more forward-looking, but even in the current configuration—policymakers can (1) enhance the neutrality and competitiveness of the state tax code, (2) improve revenue stability for the state with a tax code that grows with the economy, and (3) rebalance state revenues and allow income and sales tax collections to grow at similar rates. That would be a real win for Utahns.

3% Social Security boost? $1,200 stimulus checks? How to get needed money to seniors
Top Rates in Each State Under Joe Biden’s Tax Plan
Al Capone Convicted On This Day In 1931 After Boasting, ‘They Can’t Collect Legal Taxes From Illegal Money’
Goldman Sachs wallops profit estimates on stronger-than-expected bond trading
Corporate execs are talking differently on earnings calls to please the machines